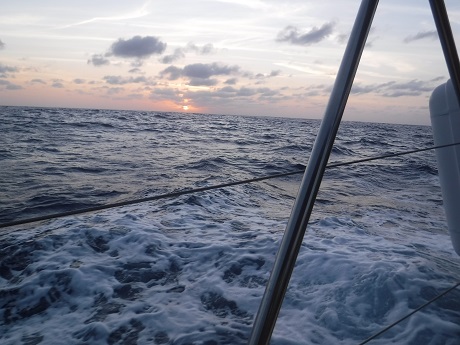 With all the delays for maintenance and repairs, combined with the fact that we had reached the bottom of the Exumas, we realised that we had a choice between the “delivery route” (east into the Atlantic till about 65 degrees W and then run down south to the BVI) and the “Thorny/Thornless Path” (depending on your viewpoint and to a certain extent the time of year) through the lower Bahamas and the coasts of DR/Puerto Rico.

We consulted with some yachties in Georgetown and they provided negative feedback on the state of the Outer Islands after the recent hurricane and also indicated that at this time of year, the “Thornless” path would comprise lots of waiting for weather and many “Thorny” patches.

Frustration with delay and the prospect of obtaining the experience of a first ocean passage made for an easy decision – we would take the ocean route. This was clinched when the weather forecasts and GRIB files showed a great window for a crossing.

We planned the route out based on average current conditions and concluded on a budget of 8 days for the crossing and provisioned/prepared accordingly. As this was our first ocean crossing and we thought that we would take strain for 8 days with only two of us to stand watches, we had Tony Ward from the BVI join us as experienced crew and coach. This proved a good decision and we learnt a lot from Tony whilst he left us plenty of space to get on with it and learn by doing.

We motored out of Elizabeth Harbour at 08h00 on 15th February and by 09h30 we had the engine off and full sail up in a good southerly wind. Tony suggested a watch system of 6 hours on during the day and 4 hours on during the night – this worked well but with only three on board, you needed to get some sleep when not on watch.

The challenge with this route is that you are going east AGAINST the prevailing trade winds, so would normally expect to be bashing into wind and wave for days on end. However, the weather gods were kind to us. We had good southerly winds for the first two days followed by a slow clocking around to NW, N, NE and some E and SE on the final run in to the BVI.

This allowed us to sail most of the time with very little use of engine. The wind got a bit upitty at times but nothing that one reef in the main and a slight furl in the foresail couldn’t handle.

Windward just loved it. She spanked along beautifully, handled the large Atlantic swells with aplomb and delivered an average of 180 nautical mile daily runs. We noted a highest speed of 11.3 knots; very comfortable.

There were very few other vessels out there in the ocean – most were AIS blips on our chart display, far over the visual horison, that never hove into view.

We just loved being out in the open ocean (despite the sense of enormity that makes you feel very small and human). The night watches were perhaps the best (and sometimes the most challenging when the wind was up). Sunsets, sunrises, moon rises and small sightings become important and beautiful events, more so than on or close to land

03h00 on the morning of the 20th February saw us enter Road Town harbour, pick up a Conch Charters Buoy, crack a bottle of champagne and collapse into our bunks for a good sleep.

It felt great to be back in the BVI where we have had such good times.

It is great to have you visit the "Windward" blog. Stay on board for updates,
%d bloggers like this: