First up was off Champagne Beach which had some great coral, lots of fish and some old artefacts being consumed by the coral such as cannon and anchor chain (we forgot the camera in the boat so no pics). It also had an area where the water was warm and hot bubbles rose up in the area – much frequented by tourists (human and fish).

Then we went up to the windy Scotts Head – amazing snorkeling off the head (so called for the English Admiral who had his chopped off on it), where in places the reef drops off dizzyingly into the depths.

The Scotts Head fishing village was very picturesque as well. 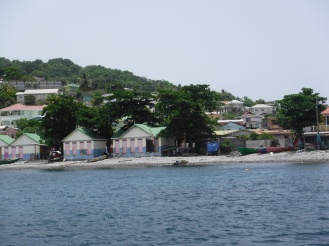 Next up we went and wallowed in a crudely built hot pool on the beach at Soufrier.

and then a slow meander back along the coast taking in the wonderful scenery.

4 thoughts on “Snorkeling with Mr. Bean”